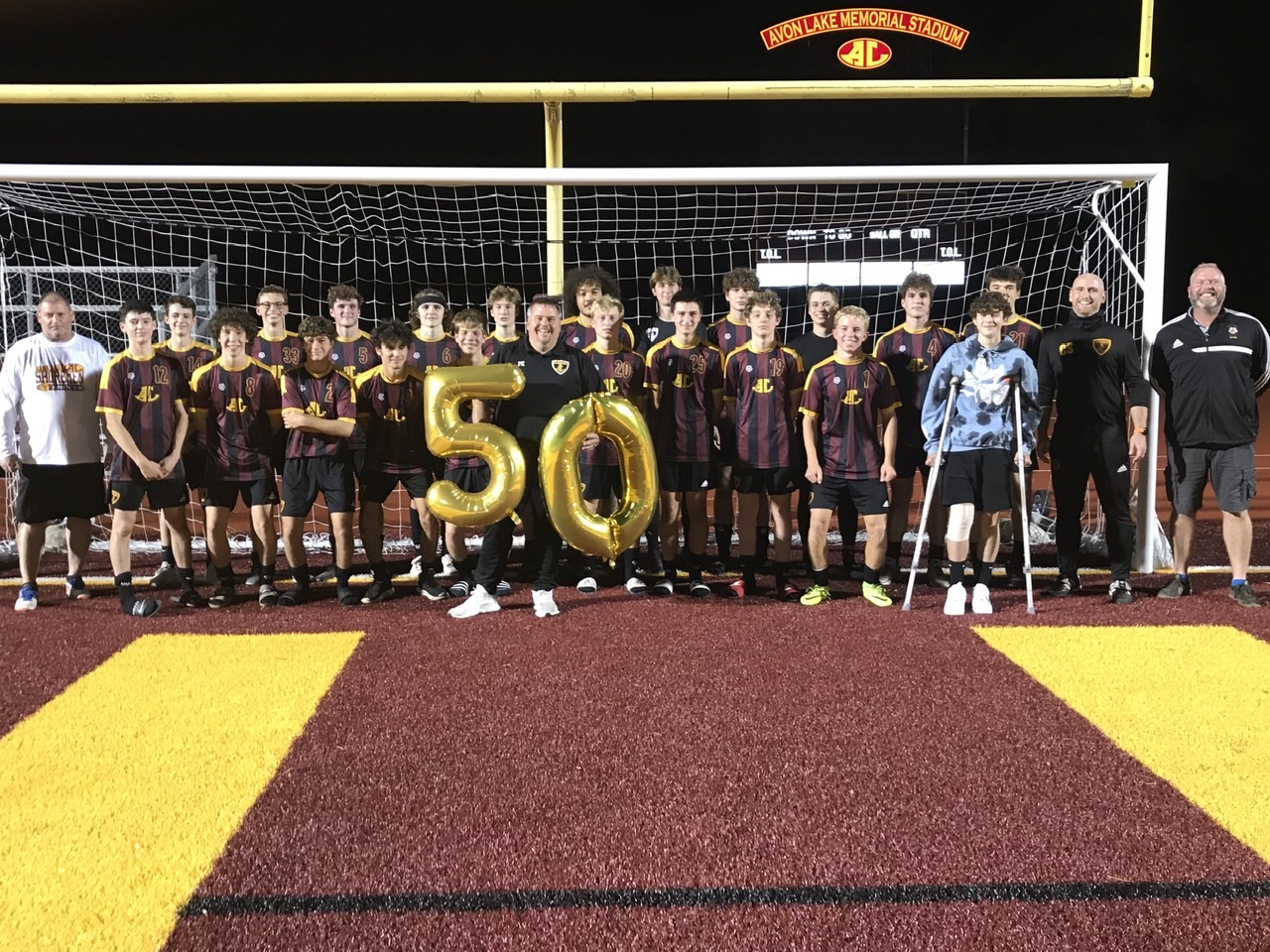 From the opening whistle it was clear the Shoremen were the superior squad, but timely saves from the talented Mentor keeper and a few less than tidy finishes kept the Cardinals in the game.

In the 3rd minute senior Logan Allemeier almost got the Shoremen off to a dream start, after a ball played in by junior Andy Neipp to senior Zach Ramsey caromed out to him. He settled, got it to his left and hit a drive that sailed wide of the target.

In the 8th minute Avon Lake put one in the back of the net off a shot that redirected off of Neipp, but he was in an offside position and the goal was taken away.

A couple of minutes later the Shoremen came close to putting one away after sophomore Max Kramhoeller received a nice diagonal ball and shook his defender, cutting it to the middle from the left and unleashing a laser that hit the corner of the right post and crossbar and stayed out.

In the 22nd minute a corner kick from the left side sailed all the way to the back side of the box where junior Jake Grode hit a half volley that went just high.

Junior Owen Wiley was almost able to pull the trigger from in close after he beat his defender with a Cruyff turn in the box, but the Cardinals keeper anticipated and got off his line quickly to smother it.

Ramsey earned a Shoremen free kick in a dangerous spot about 25 yards out in the left-center channel in the 30th. Fellow senior Tyler Johnson stepped up and curled his shot around the wall towards the upper left corner, but the Cardinals keeper made a full extension save to palm the ball out for a corner.

With under 3 minutes in the half Liam Reutter played Neipp coming from the right flank, who carried into the box and hit a shot to the back post that the keeper was able to dive to his right and save.

Mainly through his efforts the halftime score was knotted at 0-0, despite the Shoremen controlling the bulk of the half.

Avon Lake started the second half like they did the first and nearly got on the board 3 minutes in after Summerfield centered a pass for Liam Reutter, who dropped it off for Allemeier to take a right-footed shot that was destined for the bottom corner were it not for another diving save.

The breakthrough finally came in the 53rd minute after Liam Reutter found Wiley free in the box, he cut it to his left to get a better angle and slotted a near post shot for the 1-0 lead and twenty pushups for his assistant coach.

Down only 1-0 Mentor finally got a good look after some nice combinations started by the right back, who eventually ended up hitting a shot that went wide left.

The Shoremen put the game out of reach with their second goal, coming in the 72nd minute after Ramsey cut it back twice in the box to get free for a right footed shot that the Cardinals keeper did well to get a hand on, but the rebound fell to the feet of Liam Reutter for the easy finish and the 2-0 margin.

“It’s nice to generate so many offensive chances,” said head coach Pete Klepek. “Don’t get me wrong, it’d be even nicer to tuck a few more away, but I really don’t have much to complain about with how we played tonight. We dominated from whistle to whistle.”

With the win Avon Lake improves to 11-2-1 (6-1-0 SWC) heading into their final SWC match on Wednesday, home against Olmsted Falls.

The victory was also Coach Klepek’s 50th win as head coach of the Shoremen, and just the second time in the almost 40 years of the program that the team has earned 50 wins in a 4 year span. His record is an outstanding 50-14-6, good for a .757 winning percentage.

Said Klepek of his impressive accomplishment, “It feels great to get win number 50, but these are the program’s victories, not Coach Klepek’s victories. We couldn’t have this success without the talented boys that have worked hard as they’ve come through this program, and without the other coaches and parents supporting us the whole way.”

Wiley’s goal was his second of the season, while Liam Reutter’s assist added to his team-leading total, now 11, and his goal brings him to 7. Ramsey, back after missing several games due to a concussion, tallied his 6th assist of the year.

The Shoremen back line of seniors Cullen Reutter and Sean Graney, along with juniors Owen Wiley, Andrew Crooks, Jake Grode and Joel Tassinari and sophomore Max Kramhoeller, held the Cardinals to 3 shots, including none on target for junior keeper Zach Glesius to save.

The shutout was their 7th on the season, and lowers their goals against average to 0.64 per game.

Wednesday’s SWC matchup with the Bulldogs is the last chance for the Shoremen to possibly contend for the SWC Championship. With a win and an Avon tie or loss against Amherst the Shoremen would achieve their second consecutive conference title.