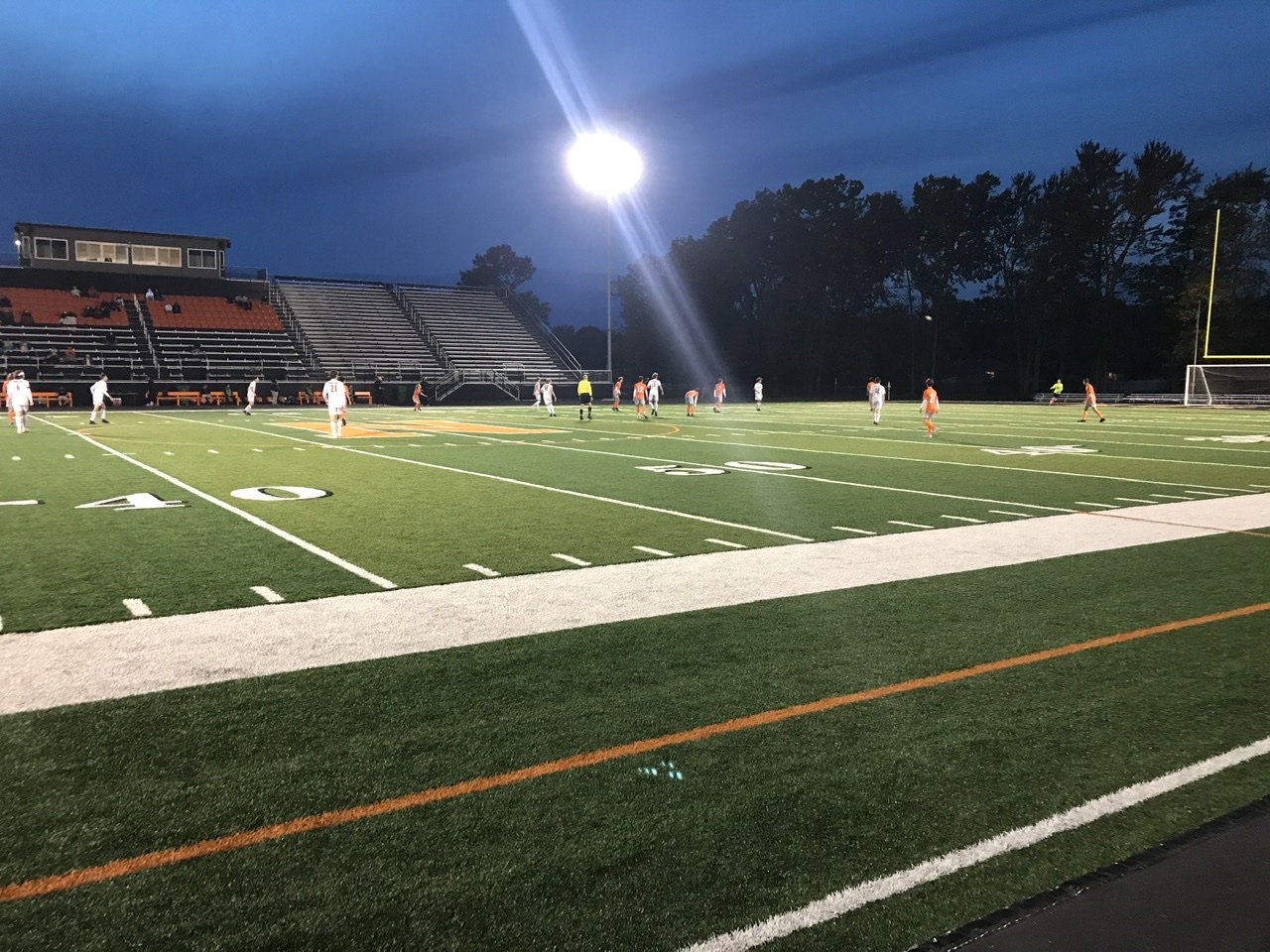 The Shoremen set the tone early, and found several shooting chances in dangerous areas but could not put anything on target to test the Rangers keeper. In fact their first shot on target did not arrive until the 20th minute.

Avon Lake finally broke through in the 24th minute after senior Liam Reutter was taken down about 40 yards out, earning a free kick. Fellow senior Zach Ramsey dropped a perfectly placed kick behind the defense for Reutter to flick with his head into the left side of the net for the first goal of the evening.

The Ramsey-Reutter connection was strong tonight, and almost paid dividends again two minutes later after Ramsey put in some hard work beating a couple of defenders before hitting a cross for Reutter to volley, but the Eastlake keeper made a great reaction save to keep it out.

In the 33rd minute Liam Reutter used some nifty dribbling to carry the ball to the end line before hitting a ball across from the right to the left corner of the 18 for sophomore Max Kramhoeller, who tucked a well hit first-time shot bar down and in for the 2-0 lead.

Just a few minutes later the Rangers managed to pull one back after a foul was given in the box for a penalty kick, which was well struck past keeper Zach Glesius to make it 2-1 going into halftime.

Avon Lake took control of the second half from the whistle, and very nearly put in a goal within the first minute after Liam Reutter found Ramsey who hit a strong shot that the keeper kept out with a huge save.

It only took another 2 minutes for the Shoremen to put in their third goal, this time after junior Nate Summerfield danced past his man on the right before feeding Ramsey, who blasted a shot that the keeper did well to parry, but Liam Reutter was there to put away the rebound.

In the 52nd minute the Shoremen showed the ruthless efficiency of their attack after Glesius collected an easy save and unloaded a throw to Ramsey around midfield. He controlled it and fed Liam Reutter streaking in on the right, who dribbled it all the way into the box before sliding a simple ball across for Summerfield to touch home to make it 4-1.

Liam Reutter garnered yet another assist in the 60th minute, finding who else but Ramsey running in on the left, who shot it into the upper right corner for the 5-1 margin.

In the 77th minute junior Joel Tassinari notched the final goal off an assist by senior Tyler Johnson, beating the keeper to the ball and poking it home.

“Other than the penalty we were in great shape all night,” said head coach Pete Klepek. “We had an opportunity to rotate some guys in there for some good minutes tonight, and when we played our game they couldn’t touch us. This is a great win leading into playoffs next week.”

Ramsey’s goal was his team-leading 13th, while his two assists give him 8 for the year. If you exclude the 4 games he missed due to a concussion he is averaging more than a goal per game, and assist every two games.

Kramhoeller and Tassinari’s goals were their first ever varsity goals, while Summerfield hit for his 6th. Johnson’s assist was his second.

The Shoremen have a first round bye and await the winner of Medina Highland and Akron Firestone. Avon Lake will host the game next Saturday at 7pm.