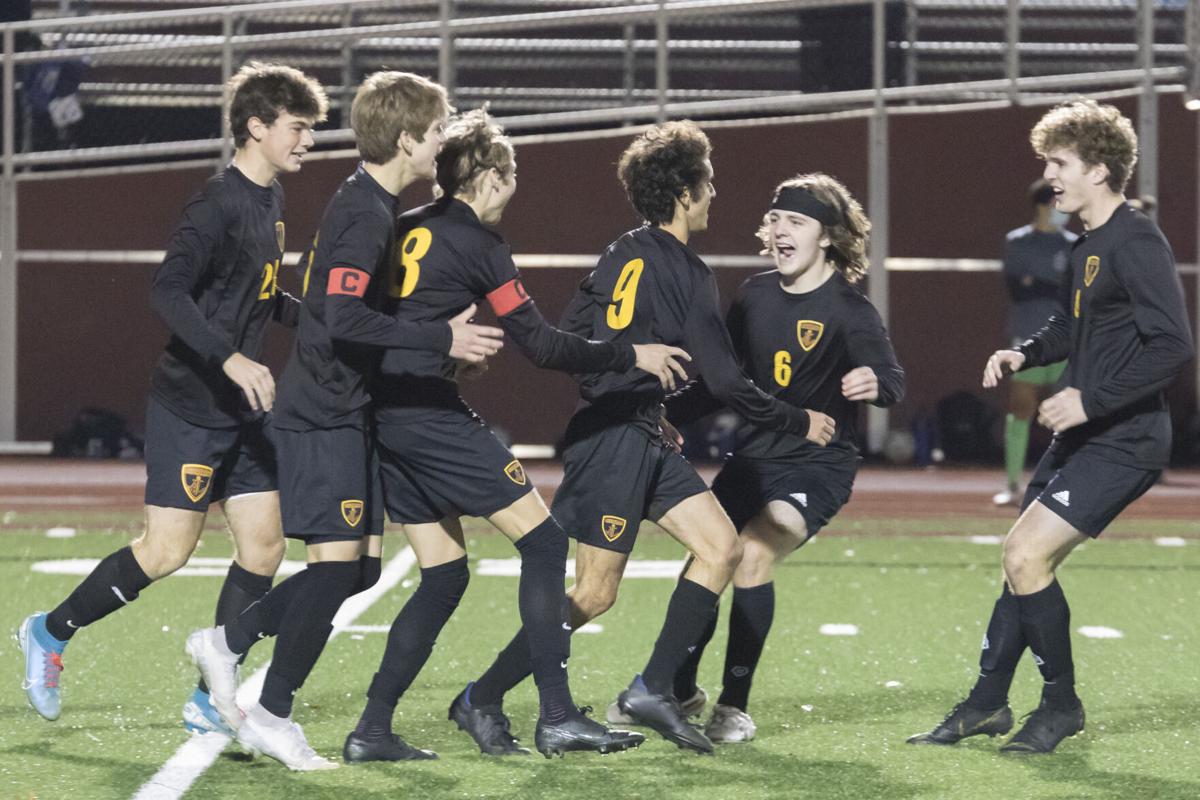 In a back and forth affair, the Avon Lake boys soccer triumphed over 6th seeded Copley to advance to the district finals.

The Shoremen took an early lead in the second minute after junior Andy Neipp played a lofted ball over the top of the Copley defense for fellow junior Nate Summerfield to run on to. As he carried the ball into the box an over eager defender knocked the ball away from Summerfield but past his own keeper to give Avon Lake a 1-0 advantage.

The Shoremen seemed poised to capitalize on the high defensive line Copley set up with, finding balls into space that forced the Copley goalie into action early and often.

In the 5th minute Summerfield had a good chance of senior Zach Ramsey’s corner kick, hitting a low shot on goal from inside the box that was cleared away by a defender.

Less than a minute later Ramsey got in on a quick breakaway of his own but his volley attempt from outside the 18 was well saved.

Then in the 7th minute senior Liam Reutter was played in nicely by Ramsey down the right and dribbled in before unleashing a shot that the Copley keeper barely managed to get a finger in, which was just enough to force it off the post.

Copley managed to settle down eventually and looked like they could make the Shoremen pay for not putting in a couple of more goals early on.

In the 21st minute they combined simply and quickly down the left side, playing 1 and 2 touch before finding their holding center mid wide open about 30 yards out. His shot buzzed just over the hands of junior keeper Zach Glesius and clanged off the crossbar. The ensuing scramble off the rebound was slotted home by a Copley forward despite being 1 on 4 in the Avon Lake box to make it 1-1.

Avon Lake didn’t wait long to retake the lead, as in the 27th minute a well placed corner kick by Ramsey found senior Cullen Reutter at the back post. He rose up over his marker and headed it back across the goal mouth for fellow senior Logan Allemeier to finish for the 2-1 lead.

The score would remain that way headed into halftime, but Copley came out ready to play in the second half, turning the tables on the Shoremen.

In the 48th minute another wide open look for Copley from distance was well struck, forcing Glesius to make an acrobatic save to touch it over the goal.

The Shoremen steadied themselves and began earning chances going the other way after the dicey second half start, even putting another goal in the back of the net only for it to be ruled offsides in the 51st.

Avon Lake had a golden opportunity to put the game out of reach five minutes later after Allemeier bent a lovely left footed ball over the top of the Copley back line for Ramsey streaking in. He was able to touch it around the keeper but before he could pass home into the empty net a last ditch sliding effort from a Copley defender managed to deflect it out for a corner kick to keep it 2-1.

To their credit, Copley didn’t give up and continued to force the Shoremen into dangerous situations. In the 63rd minute a poor Shoremen clearance led to a shot in the box that took a carom, but Glesius managed to keep it in front and push it away, and junior Owen Wiley beat his man to the ball to clear the threat.

The Avon Lake defense stepped up big time in the second half to hold Copley goalless despite the best efforts of their talented attacking players. Glesius, along with Cullen Reutter, senior Sean Graney, Owen Wiley, sophomore Max Kramhoeller, junior Andrew Crooks and junior Jake Grode, defended with intensity through the final whistle, and a 2-1 playoff victory.

“That was not our best performance,” said head coach Pete Klepek. “But that is a credit to Copley. They took us out of what we like to do, and it forced us to find another way to win. And we did. I’m so proud of our boys for stepping up, handling the adversity and getting the win. There are no more easy games because these are all quality opponents, so demonstrating the capacity to persevere is a confidence builder.”

Allemeier’s game winning goal was his 6th goal of the season, and Cullen Reutter’s second assist.

The win improves Avon Lake’s record on the year to 15-2-1, and their record at home to 9-0-1. That last stat is notable because the Shoremen will host the district final on Saturday October 28th after 5th seeded Brunswick took out 3rd seeded Avon on a last minute double OT goal.